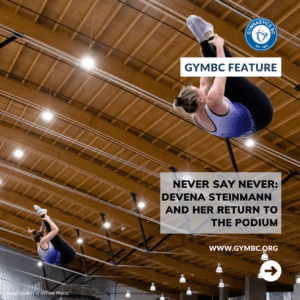 Back at the GymBC Trampoline Gymnastics (TG) Championships this past April, there were rumblings that a coach was going to compete as part of a synchro pair that weekend.

True enough, when the time came for the L5 Women’s Synchro competition, athlete Gabi Brown hopped up onto a trampoline, and on the trampoline beside her stood coach Devena Steinmann.

Off they went, as other clubs, coaches and athletes gathered around the arena floor to cheer them on. Up in the stands, the crowd could be seen inching towards the competition space, eager to get a closer look at the duo.

The pair jumped. Their rhythm, timing and skills looked polished and effortless. They stayed in sync throughout the 30 second routine, and finished with smiling faces in front of a crowd that clapped and cheered in awe.

This month, GymBC had the pleasure of sitting down to chat with Devena, to learn more about how she got involved in the sport, and what has kept her in the TG world over the decades.

A former artistic gymnast, Devena quit the discipline at age 12 after suffering an ankle injury. She tried other sports, but none seemed to stick; that is, until she was introduced to tTG.

Devena worked her way up to earning a spot on the Canadian National Team from 1990-1995, and retired as an athlete after the World Age Groups in 1996. A former coach and judge, she found her way back into coaching a decade ago and hasn’t looked back since. 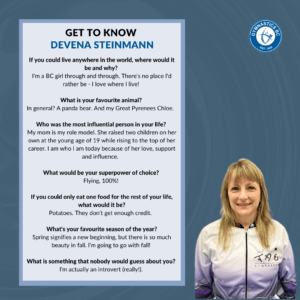 But ‘coach’ is only one of the many hats that she wears. By day, Devena is the Senior director of lab services for Fraser Health, which is the second largest health authority in Canada. She is also the proud mom to two teenage boys (and a puppy) – there is never a dull moment in her life!

When asked what her goals for this upcoming season, Devena was quick to share that her primary focus as a coach is to help raise well-rounded human beings. Resiliency, self-betterment and leadership are three skills she is proud to instill in her athletes, and she strongly believes that sport is the perfect vehicle to do so. She is passionate about fostering a positive culture in the gym, and modeling behaviors through example. It isn’t always easy coaching teenage girls, but the rewards far outweigh the challenges.

While her life and busy schedule isn’t for everyone, Devena couldn’t imagine it any other way. Two and a half years ago, her husband tragically passed away. If it wasn’t for the gym, which is her home away from home, Devena doesn’t know how she would have made it through that difficult time. The gym is her sanctuary, safe space, and escape from the inevitable struggles of life. The care, passion and bond she has built with her athletes are what continues to keep her spirits bright and soul happy.

The feeling of community in TG is something else that has kept Devena in this space for so long. Her favourite memory dates back to 1996 at her last competition. Her coach, Colin Hancock, had broken his pelvis, but checked himself out of the hospital to drive down to the event and support her. Surrounded by teammates and the larger BC TG community that had come out to cheer her on, Devena headed into finals on trampoline in 4th place. After performing the best routine of her life, her chances at a podium finish dropped when subsequent competitors performed stronger routines. The tides turned when the last competitor made an error. Once her support crew realized what this meant for Devena, the arena erupted into applause. At her last ever competition, Devena had secured a bronze medal on trampoline.

This brings us back to recent events, when we asked Devena to share the series of events that led to her competing at Provincial Championships. 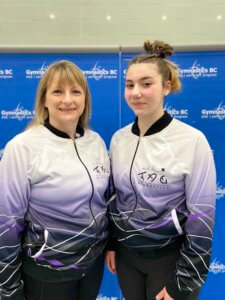 It turns out that, as COVID shut down the sports industry, one of her athletes, Gabi, found herself without a synchro partner. To keep her spirits up, Devena would jump up and practice with her for fun. The running joke was that they would enroll in the competition.

As Provincials drew closer, Gabi reminded Devena about registration. Gabi, ever the optimist, didn’t think there were any obstacles to participation. Despite only really having trained a month beforehand, Devena found herself agreeing to the wild idea after receiving confirmation that she was eligible. She was, after all, in the best shape of her life, and most importantly, she wanted to do this for Gabi.

While the duo took on this challenge for fun, their hard work ended up paying off, as Gabi and Devena won a silver medal for their performance. In Gabi’s own words, “that was such a special moment and it will forever be such an iconic event”.

Last but certainly not least, we asked Devena if we might see her name in the competition lineup again anytime soon. Her response? Stay tuned … we might see a comeback to celebrate her 50th birthday!

In the meantime, make sure you check out the photos and videos of Devena’s TG career through the years, and her most recent comeback, below!