On October 22, 2022, Gymnastics BC (GymBC) members, family and friends, gathered to celebrate the outstanding achievements of our GymBC community in 2022.

Some highlights from our awards night include the following:

The GymBC Member of Distinction awards honours individuals whose long-term commitment, contributions and achievements have benefited gymnastics in B.C. 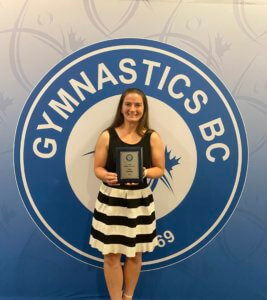 This year we are pleased to announce Lisa Laundry as a recipient of this award.

Lisa is a member of the Quesnel Technics Gymnastics Club and has been a member of the GymBC community in many capacities over the years. She began her gymnastics career at the age of 5 when her mom enrolled her in gymnastics after she broke her arm in the living room trying to do a cartwheel.  Since then, she has been an athlete, coach, judge, club secretary, Zone 8 Judging Chairperson and a member of the Women’s Judging Committee.

In the Zone 8 Judging Chair role, Lisa works tirelessly to ensure that judges have as many opportunities as possible with regards to continuing education.  She constantly works to recruit new judges in her zone, and is eager to mentor whenever possible.  One of her true joys is helping small communities promote gymnastics.

Lisa would like to thank her mom, Elaine, for enrolling her in gymnastics all those years ago, and her husband, James, for his continuous support while she plans random trips to Northern BC to coach and judge.

She has been a wonderful member of the GymBC community, bringing years of experience and expertise to athletes, coaches and judges.

The prestigious GymBC Life Member award honors an individual who has devoted their life’s work to bettering our sport and acting in the best interest of our GymBC community. Life Members are selected from the GymBC Members of Distinction winners list.

In 2022, GymBC recognized two individuals as recipients of the GymBC Life Member Award.

The first recipient of the GymBC Life Member Award is Vivien Symington. 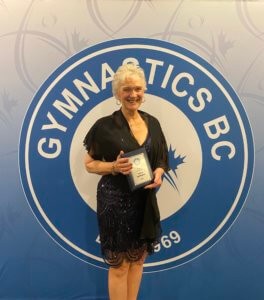 Vivien founded Club Aviva in 1986. At the time, it was one of the leading gymnastics facilities in BC offering a wide variety of unique programs. In 2002, she founded the Empowering Steps Program, a unique child-centered intervention for children and youth with Autism and other neurodevelopmental disabilities. She further established the Symington Endowment Fund, which supports youth at risk, children with neurodevelopmental disabilities and gymnasts in the pursuit of excellence.

In 2018, she founded the Symington Symbiotic Foundation, a registered charity for the purpose of relieving conditions associated with disability by providing gymnastics programs which promote physical, mental and emotional well-being.

Vivien has won a variety of awards for her contributions to sport and well-being, including the Tri-City Small Business Excellence Award in 2005, the Ed Brougham Award in 2010, was named the Tri-Cities Chamber Business Leader of the Year and inducted into the Coquitlam Sport Hall of Fame as a Community Builder in 2017, and received the A-List award from the Tri-City news in 2022.

Vivien uses the little spare time she has to travel, spend time with her grandkids and cycle with her husband.

The second recipient of the GymBC Life Member Award is Colleen Kaminski. 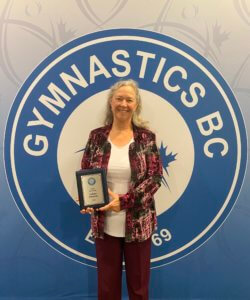 Throughout her time in gymnastics, Colleen has been a gym parent, gymnast, judge and coach.

About 36 years ago, Colleen’s daughter began recreational gymnastics classes. After a year, she was invited to join a pre-competitive program – this is when Colleen’s volunteer journey began.

In 1993, Colleen began volunteering with the club, and then moved onto judging. She took her first coaching course – with the goal to help enhance her judging skills.

In 1996, she competed for her first time ever (and last) at the Luau Cup adult competition. She had mastered her pullover and had to show it off – she was 40 years old.

In 2008, Colleen added coach developer to her resumé. To date, she has taught and completed about 250 courses and evaluations!

She then added coaching MAG into her portfolio in 2009, and soon after started judging MAG – this time, to enhance her coaching skills. Colleen has held a variety of roles in the community including, Judging Chair, Secretary, Treasurer and Zone Chair. For GymBC, she has been on the GFA committee and WJC, been the GymBC Treasurer and a Zone Director.

Colleen received the Member of Distinction award in 2006 and awarded the GFA Leader of the year in 2014.

This year, the GymBC MAG community would like to recognize a longstanding member for his contributions over the decades.

This individual has been in the BC Gymnastics community for 50 years, first participating as an athlete, then as a coach and finally as a judge.  As he is heading towards retirement after 40 years of judging, the MAG community wanted to offer a special recognition to Norm Rowe for his years of dedicated service to GymBC. 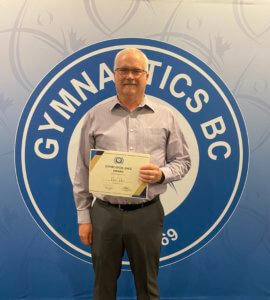 Norm joined the YMCA in New Westminster in 1970 to learn how to swim, but was afraid of the water so would sneak in to do gymnastics instead! The following year, his coach, John Tutte, wanted Norm to go into a competition so he had to confess to his parents that he was doing gymnastics and not swimming! He trained with John Tutte at North Star Boys club – which later became the Surrey Gymnastics Society (SGS) – on and off until he retired from competing in 1980.

He then coached at SGS for almost three years.  However, working full-time while coaching proved to be too much, so he stepped back from his coaching duties.  In order to stay involved in gymnastics, he started to judge, but also sat on the SGS board as an athlete rep for four years.

He wrote and attained his first FIG brevet in 1997 and has judged actively since then in numerous competitions, including the Western Canadian Championships, Elite Canada, National Championships and 5 Canada Winter Games.

Norm loves the sport, and is thankful to have been involved in gymnastics for over 50 years.  He would like to thank everyone that makes gymnastics a part of their lives. 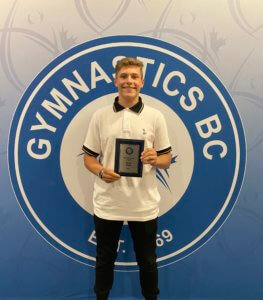 Gavin started in gymnastics at the age of two, jumping on a trampoline in parent and tot classes. It quickly became his favourite activity and at the age of six, he competed at his first Shasta trials in both Trampoline and Double Mini.

Dodd cites that his favourite thing about competing in the sport is the camaraderie between the athletes, the opportunity to travel and meet international athletes, and tackle new challenges.

Thank you to our GymBC community for continuing to go above and beyond in their pursuit for excellence at all levels.