Vancouver, BC (March 2, 2022) — Gymnastics BC (GymBC) is pleased to announce that a Flip City Gymnastics Club coach has been named to the Women in Coaching Canada Games Apprenticeship Program for 2023.  The purpose of the Canada Games Apprenticeship Program is to provide women coaches with a practical and integrated major national multi-sport games experience. Selected coaches have direct involvement in preparation and competition and receive support from an identified mentor coach throughout the duration of the program.

Lilla Gulyas, Flip City Gymnastics Club received official confirmation that she has been accepted into the 2023 Women in Coaching Canada Games Apprenticeship Program. “Only 2 women were accepted into the 2023 program,” commented Christine Ormerod, Technical Director, GymBC.  “This is an extraordinary opportunity for Lilla, our TG community and our team going to the 2023 Canada Winter Games.” The Canada Games Women in Coaching Apprenticeship program is a unique mentorship opportunity for women coaches across the country.

“The most rewarding part of my coaching career has been creating meaningful relationships with my athletes that prioritize honesty and communication. When I think about my coaching career objectives, I think of my athletes. I think of the goals we have set together and how we are going to achieve them,” commented Gulyas. “Personally, I would like the opportunity to take an athlete to World Age Groups and Winter Games. My dream since I began coaching is to coach an athlete to Olympic level on trampoline.” 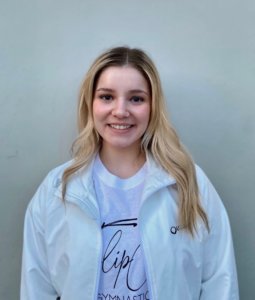 Gulyas has been coaching gymnastics for a decade. Coaching was her first job, and one that has her hooked for life! Having been an athlete in both trampoline and artistic gymnastics, she fell deeply in love with the sport and upon her retirement she moved towards coaching. She considers herself a well-rounded coach, having years of experience in coaching women’s artistic gymnastics, recreational, and specializing in trampoline gymnastics.

After specializing in trampoline, Gulyas began to quickly pursue a higher level of certification to better herself as a coach. She is CSI–P certified, and Level 3 NCCP trained, working towards her Level 4 in the near future. In addition, she has pursued additional certification in courses such as “Keeping Girls in Sport” and “Intro to Gender Diversity” to support all of the athletes she works with. Throughout this additional training, Gulyas has seen immense growth in herself as a woman and coach who strives to actively encourage the athletes and junior coaches to be confident and passionate.

Throughout her coaching career, Lilla has coached many athletes to a national level, including two 2021 National Champions on Trampoline and Double Mini Trampoline, and many athletes to Western Canada Cup on Team BC. Lilla believes that producing high level, successful athletes requires strong relationships with the entire support network; collaboration and communication with parents, other coaches, and GymBC is hugely important in supporting athletes on their competitive path. 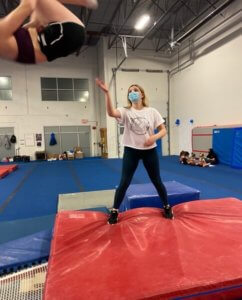 Gulyas takes every opportunity to learn and grow, including attending clinics, high-performance camps, and being on the BC Trampoline Technical Committee. She is grateful to work at Flip City Gymnastics, a club that has hosted numerous BC Championships giving her the opportunity to be involved with the planning and organization of this meet. Being a part of the technical committee and planning meets allows her to be deeply involved in the trampoline community, outside of directly coaching.

The CGC, the CAC, and PTCRs strongly believe that the apprenticeship program is an essential part of the development of a coach. Furthermore, apprenticeship programs can be used as a means to build capacity in underrepresented populations in coaching, such as women and Indigenous coaches.