Exciting news for Team BC athlete Shallon Olsen as she achieved what felt like the impossible – qualifying as part of the 4-person Women’s Artistic team to Tokyo after quarantines, lockdowns, and at-home training. “It felt like starting from zero,” Shallon said, discussing her journey, “But I have muscle memory, and the body just doesn’t forget, and I knew it was just a matter of gaining fitness and strength back.” Shallon trained with the University of Alabama during the school season, where her coaches provided support leading up to the series of virtual competitions that Canada hosted between January and June of 2021. It was these virtual competitions that allowed Canadian athletes to compete for national rankings, and in the case of some athletes, make their final bid for the team.

However for Shallon, one more hurdle appeared – the return from the United States into Canada, in which she was required to quarantine again for two weeks, leaving her just ten calendar days to prepare for the final Olympic Trial – Canadian Championships. The vaults she performed for the Championships demonstrated her capacity despite the restrictions, landing her in first place on vault, and defending her title as Canadian Senior Vault Champion. Shallon said that this year, things were different. “I have more experience now, more confidence, and I have my sights clearly set on what I want. Last time, I was just so happy to make the team in Rio – this time, I want more.”

When asked what she is most looking forward to in Tokyo, Shallon recognized that the Olympics will be different. “I know the restrictions will be tight, but I have a hope that maybe I will get a chance to see and learn about Japan. I have never been before, and I know there is so much more there than what we might think. I love nature, and Japan is a beautiful country.”

Shallon, and her coach Dorina from Flicka Gymnastics Club, leave for a camp in Montreal on July 4th, and then head to Yokkaichi prior to Tokyo for acclimatization. When asked about her experience working with Shallon, Dorina was clear: “When Shallon came to me she was already an Olympian. She is determined, and I know that whatever goal she sets her sights on, she will achieve. There are lots of stressful situations, but I trust that she will do what she is supposed to do.”

Dorina continued by recognizing that her chance to go with Shallon to Tokyo is a great opportunity, but that it has come because of the work of many other people as well. “First, I need to say acknowledge that Shallons’ former coaches did a lot to get her to this level.” The coaches at the University of Alabama were instrumental in Shallon’s maintenance of her fitness and skill content. “If it were not for them, this would have been difficult, or nearly impossible.” Dorina also wanted to acknowledge her club, Flicka Gymnastics Club. “They supported me for so many years to get this experience, and for providing the experiences that came before this to prepare me to coach someone like Shallon today.” Finally, she wanted to thank Gymnastics Canada and Gymnastics BC for their many years of support.

When asked what she wanted her BC fans to know, Shallon said,

“GO CANADA, GO BC, and see you in Tokyo! Be ready, Canada has a lot to prove!” 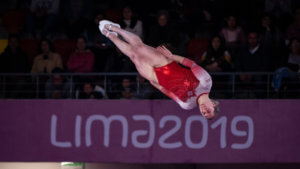 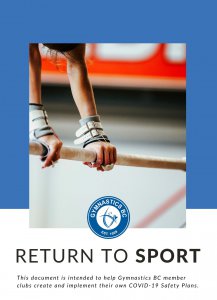